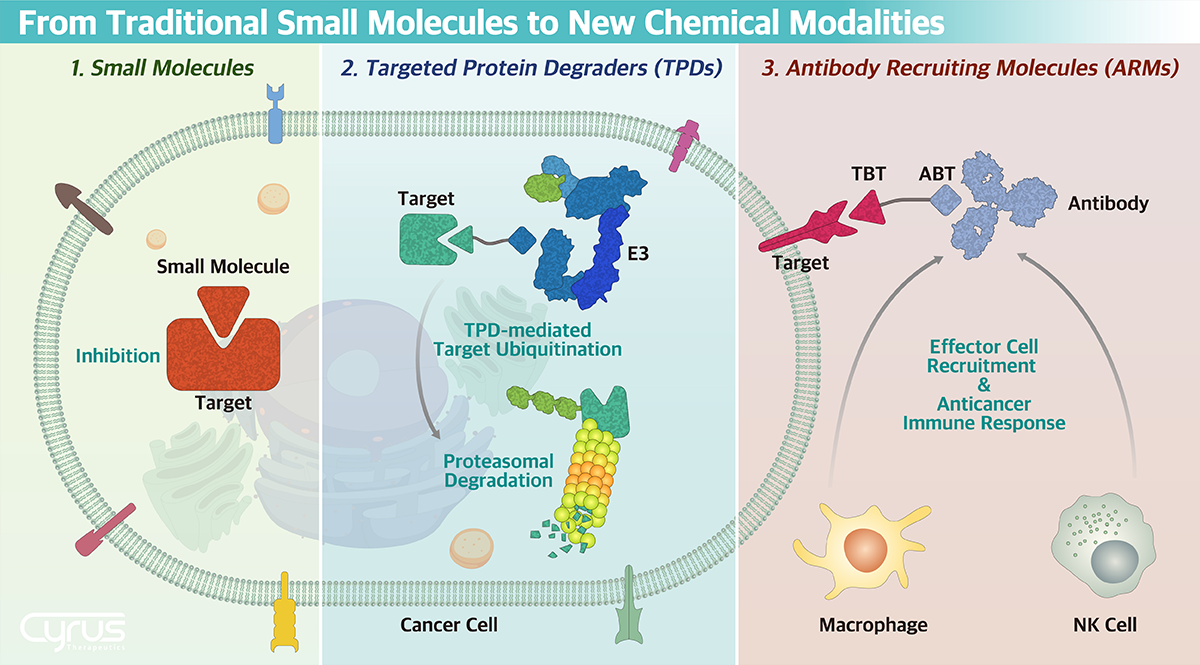 2. Targeted protein degradation
A targeted protein degrader is a heterobifunctional small molecule that consists of three key chemical moieties – a binder of a protein of interest (POI), a binder of an E3 ubiquitin ligase, and a chemical linker connecting two binders. The heterobifunctional degraders induce molecular proximity between an E3 ligase and a POI, leading to ubiquitination to and degradation of the POI by ubiquitin–proteasome system (UPS), a cell’s natural garbage disposal system. The degraders act in a catalytic mode with potential advantages over traditional small molecule inhibitors in terms of modulating ‘undruggable’ targets, drug resistance, selectivity, and dosing. Targeted protein degradation (TPD) is an emerging modality for the treatment of cancer and has the potential not only to expand the druggable proteome beyond the reach of classical small molecule inhibitors but also to develop therapeutic strategies of undruggable proteins. 1, 2

3. Antibody-recruiting small molecules
An antibody-recruiting molecule (ARM) is a heterobifunctional small molecule composed of three components: a target-binding terminus (TBT), an antibody-binding terminus (ABT), and a chemical linker connecting TBT to ABT. When TBT binds to a cell surface protein, ABT can bind to anti-hapten antibodies, resulting in the formation of a ternary complex that will recruit downstream effector responses such as antibody-dependent cellular phagocytosis (ADCP), antibody-dependent cell-mediated cytotoxicity (ADCC), and complement-dependent cytotoxicity (CDC).1 The resulting outcome is a cancer cell death by cooperating with innate immune system.

Transcription factors (TFs) regulate gene expressions by binding to specific sequences such as promoters and enhancers. Large clusters of transcriptional enhancers are referred to as super-enhancers (SEs), which accelerate gene expression via occupying TFs and mediators. SEs play a critical role in gene expressions. Those are mainly associated with oncogenes to promote tumor cell survival and proliferation. SE-associated genes are more sensitive to the loss of master TFs than those found in conventional enhancers. Cyrus Therapeutics is developing novel inhibitors of TFs and their regulators that can block the activity of these dysregulated SEs, resulting in powerful drugs with wide applicability.

The RAS/MAPK pathway is one of the most well-characterized signal transduction pathways in cancer biology. This pathway transduces signals from the extracellular environment to the cell nucleus resulting in the induction of specific genes which control cell growth, proliferation, and differentiation. Abnormal activation of this signaling pathway by a series of alterations in the cellular genome drives oncogenesis in many human cancers including colon, pancreatic, and lung cancers. Unfortunately, drug resistance of RAS/MAPK inhibitors frequently arises from on-target mutations and signaling reactivations by feedback loop or target bypass. To overcome this resistance, Cyrus Therapeutics is developing a new targeted therapy for the RAS/MAPK pathway using small molecules, which can be used in both monotherapy and combination treatment with existing RAS/MAPK pathway-targeted inhibitors.

Cancer is a genetic disease and most cancers have signature mutations which drive development of cancers. Recent advances in Next Generation Sequencing (NGS) and Artificial Intelligence (AI) technologies provide higher resolution of the DNA maps of cancer cells and contribute to the development of patient-specific cancer therapies. Synthetic lethality is a concept of co-occurrence of mutations in two genes that induces cell death. This mechanism has been applied to develop new targeted therapy for cancer patients with BRCA1/2 mutations and selectively kills cancer cells with the mutations. The success of synthetic lethality-based therapy (e.g. PARP inhibitors) opened new therapeutic windows for genetic alterations associated with DNA damage response and cell cycle. Cyrus Therapeutics is using the results from NGS and AI to identify and target synthetic lethal genes and proteins. The development of new synthetic lethal-based therapies will precisely target cancer cells, improving outcomes and quality of life in cancer patients.

Cancer immunotherapy is a therapy that uses the body’s own immune system to kill cancer. The recent success of immunotherapies such as immune checkpoint inhibitors and CAR T-cells has initiated a paradigm shift in clinical and preclinical investigations. However, only a fraction of patients currently respond to immunotherapy, due to a highly immunosuppressive tumor microenvironment. Cyrus Therapeutics is developing small molecules that can reduce immune suppression in tumors and enhance activation of the immune anti-tumor killing abilities. These drugs can be used as monotherapy or combined with other cancer therapies to increase and broaden their efficacy.